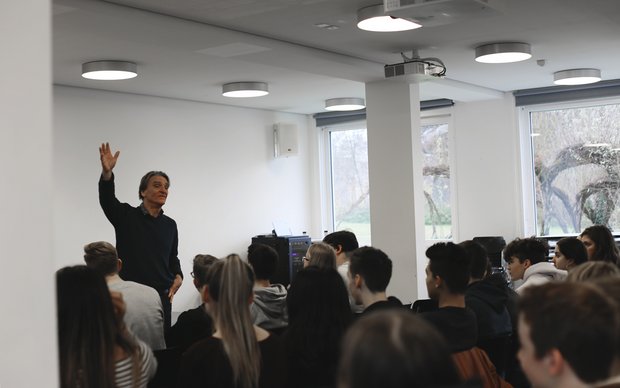 On Wednesday, 5th December 2018, the Kantonsschule Uster had the honour to welcome the British author Melvin Burgess. He is well-known for his controversial but honest YA-books. He likes writing books for young adults. From his point of view, there is simply not enough literature for them in which their questions about life are discussed. That’s why his stories are so disputed. Some parents don’t want their children to read about certain topics, even though those are the most important ones to them.

In the reading, he talked about two of his books. He started with his most popular novel “Junk”, which deals with two adolescents who run away from home and start a new life in Bristol, becoming addicted to hard drugs. Someone asked him, if this story is based on his own experiences. “If it was based on my own experience, would it still be fiction then?” he replied.

For him, writing fiction is about creating new characters, thinking about what could happen to them and how they would react in certain situations. It’s more about living another life instead of reflecting your own. The second book he talked about is called “The Hit” and is about a pill that lets the consumer have the best time of his life for one week only – after this week, the drug kills you. He started an exciting discussion with us and asked about the conditions for taking this pill and if there were any causes great enough to sacrifice our own lives for, such as a revolution or the fight for democracy.

The reading with Melvin Burgess was really interesting. He did not only read from his books, but also wanted us to really take part in this event and get to know him and his background better. I’d like to thank Melvin Burgess in behalf of all the classes and teachers for coming to our school and telling us a little bit about him and his works.